In my college we are currently grappling with classroom layouts and re-thinking how they can reflect/promote best practice in teaching and learning. I decided to throw the question out to the #AusELT brains trust to see what the rest of you folk were doing in your various organisations, and was stunned by (and most appreciative of) your interest, your ideas, and the sheer number of responses. So, on Lesley C’s brilliant suggestion, and in ode to you all, here is a summary of your responses for handy reference.

Desks in pairs came up as a first response. Obviously great for pair work, plus easy to split for individual work when needed, or for more effective monitoring of individual students.

The U-shape or horseshoe was another favourite, with one of the reasons being that students cannot hide in such a configuration. The downside of course is the face-threatening element and the possibility of it becoming a teacher-fronted classroom.

Rows came up, more as a method of classroom management, but did not seem to be popular, especially in an ELT classroom where communicative language teaching and learning is the aim.

Small grouped desks came out as king, especially for mixed-ability classes in order to group levels, or as self-guided workstations with different activities per grouping, and students cycling around to each one. Nesting in groups of four is popular, as is rotating students throughout the day. Large groups of eight were also suggested (also see boardroom set-up below). The downside of course is neck-twisting to see the teacher/board. (Perhaps if the board and teacher aren’t always situated in the same traditional place, this could be improved…?)

The circle was suggested for whole-class discussions, and this is known to be a very democratic layout, where the teacher is essentially situated at the same level of ‘power’ as the students.

The boardroom set-up is also in use, and this one fascinates me. Is it more egalitarian, or do boardroom distribution of power laws come into play according to who is sitting where? The teacher who suggested it has six long, narrow tables, and seven elementary students, with each person being able to speak to another and switch partners for different activities. The suggestion was that it can work for up to ten students, depending on room size. Another teacher runs small-group conversation classes at large tables with a similar set-up. And the ‘boardroom’ teacher also noted that as the room is quite large, she asks one student each day to lead the rest of the class in a physical exercise activity in the afternoon. Classroom as soccer field! What is there not to love?!

As for the furniture itself, anything that is quickly and easily rearranged is preferred. Node or pod chairs seem to be favoured, as they allow teachers the freedom to quickly create new groupings with little fuss, and anything on wheels is a plus. Some prefer squares, some prefer circles. Trapezoidal tables in the photo below provided by Nicki Blake, separated for exams and combined for pair- and groupwork (came with thigh-bruising warning); simple square table grouping observed at a UECA PDFest and light tables on castor wheels that students can easily move themselves, courtesy of Lesley Cioccarelli.

I’ve also added here a photo of some of the pod chairs at my centre – as noted by Meredith Macauley, excellent on so many levels for use in ELT classrooms, as they move easily, bags are stored on the tray underneath, and they are especially effective when combined with whiteboard walls around the whole room. The downside is that sometimes the desks are a little too small, and that these small desks are not viable in some of our Foundation and Diploma classrooms, where a minimum desk size is mandated for university exams.

I wanted to make a special mention of some of Virginia Mawer’s use of desks, such as placing them against the outside walls. Such a configuration had never occurred to me, other than when I am trying to get desks out of the way. The suggestion is to have students completing some of their tasks facing the wall, and then turning and facing the centre for group discussions. Virginia also suggested a long runway down the centre of the room as per her photos below, facing either inwards or outwards. I will put a reference to Scrivener below with further ideas on such bold configurations.

All the ideas and suggestions were tempered of course by the needs and type of class, the number of students and the size of the classroom, and the existing furniture. Physical constraints are of course a big issue. Classroom layout is sometimes (often?) governed by simple laws of physics, i.e. the best layout is the one that allows the greatest number of students in the room, especially for those schools in the CBD where pedagogical real estate is both costly and scarce. Some of you spoke of classrooms that are so packed that you can hardly move between desks to reach all the students, let alone reconfigure them. And large, heavy desks seemed to cause similar issues.

Hats off to Tori Bikutoria Uiruson who then brought student voice and choice into the picture, with the mild suggestion of “You could try asking the students…”. Different reactions came up as to how willing students are to move furniture (with most politely doing what the teacher asks) and whether they actually enjoy switching desks throughout the day/week. It was suggested that constant movement can be destabilising for anxious and introverted students, or simply irritating for others, and that students should have more control over how things play out in the classroom. One class would move the desks immediately into groups and then rearrange back into rows for the next teacher so that their teacher wouldn’t get into trouble. My own experience tells me that this is a common scenario, and makes me wonder why we teachers can be so grumpy with each other?

Overall, a more reflective and principled use of groupwork and mixing was proposed, especially for those working with traumatised students, where stability in the classroom might be more effective and appreciated, and simply negotiating the layout with students seemed to be a favoured approach. And then, as all good discussions do, this one eventually (d)evolved into something a little more quirky, courtesy of Clare McGrath, which in this case was Nissan’s self-parking robot chairs. Click this link if you are as intrigued as I was: https://www.youtube.com/watch?v=FLEgvD7iG-M

As we have all found, the semiotics of our classroom are powerful, and the simple result is: space speaks. Experimenting with how to best utilise that space is a fun prospect, and of course the common thread is that it is highly situated – dependent upon school, learner, space, activity, time.

Thanks once again everyone for all your responses, ideas and links. I’d love to be a fly on a wall, or a student at/not at a desk/in a pod chair/nested in a group/within the horseshoe/sitting on the runway in your classrooms. And I cheekily suggest that we all head slightly towards teaching on the edge of chaos (someone else’s brilliant idea, not mine), rather than by default. Mix your classrooms up, give Scrivener’s hotels, bars and aeroplanes a shot (reference below), get your students used to following the layout you have mapped out and posted up on the door and let them move the furniture themselves before you even arrive, and keep smiling sweetly at those of us who turn grumpy when the ‘leave it as you found it’ rule is broken…

For anyone who wishes to delve further, here are a few good readings on classroom layout and classroom ecology:

‘Classroom layout – what does the research say?’ https://www.teachermagazine.com.au/articles/classroom-layout-what-does-the-research-say  (kindly provided by Stacey Takahashi)

This chat has now taken place. Click here to read the transcript. 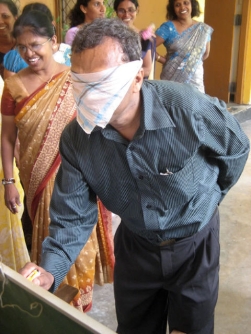 A new teacher can feel like they’re starting out blindfolded with one hand tied behind their back.

The focus of the chat will be on supporting teachers that are new to the ELT profession and we are looking forward to hearing your stories whether you are new to the industry or not. We would like to extend a welcome to all new and experienced teachers and hope that this will be an opportunity to get a few tips together that novice teachers can follow.

We will structure that chat around the following questions:

This chat has now taken place. Click here to read the transcript.